In November 2013, a short video, “Somewhere in America #MIPSTERZ,” circulated throughout social media and elicited a great deal of discussion and debate. The video introduced the audience to the mipsterz movement, a loose collection of young people who identify in some way with Islam and who have a tongue-in-cheek interest in hipster culture. The video itself was a fashion spread that featured about twenty women who showcase various stylish outfits in urban landscapes, skateboard in high heels, take selfies, dance and run through parks. Even though the women do not speak, they communicate confidence, strength and pride in their identities through their style, bodily gestures and facial expressions. 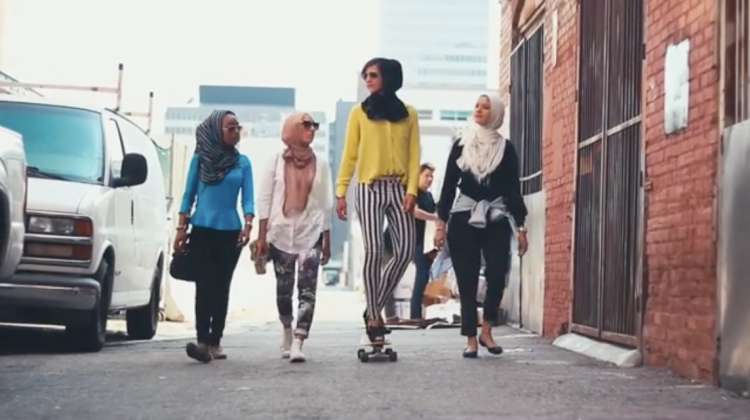 In part because of the lack of positive visual portrayals of Muslim women in American culture and the pressure on Muslim women to always perfectly represent the religion, the mipsterz video raised contentious debates within Islamic communities. Criticisms poured in that the video misrepresents Islam, that the women objectify themselves by appearing in a fashion style video, that the video promotes over-consumption and a focus on appearances, and that the women are immodest and over-sexualized.

Perhaps one of the most well-circulated critiques came from Sana Saeed, a writer for The Islamic Monthly, in which she argues that the video attempts to normalize Muslims by fitting them into mainstream culture and presents a shallow visual portrayal of American Muslim women. Saeed concedes that the video is aesthetically attractive, but she finds little substance in these images. She writes, “The video doesn’t really seem to have any purpose aside from showing well-dressed, put together Muslim women in poses perfect for a magazine spread.” Saeed seems doubtful that visual portrayals can ever provide a deep and unproblematic representation of Muslims. In response to these criticisms, several of the women who participated in the mipsterz video offered their reasons for creating the video. Layla Shaikley, a participant and the fashion director for the video, explains in a written reflection that she was tired of always having to tell her story about her faith using words, so instead she wanted to participate in what she calls a “creative action.” She views the mipsterz video as a self-portrait of her identity and an expression of the larger mipsterz identity.

One of the creators of the video, Habib Yazdi, insists that the video was an effort to shift assumptions about the visual portrayal of Muslim women by creating new images. “We want to give people a different experience of what they tend to see and hear about Muslim women,” Yazdi explains in an article. “You see how easy it is to manipulate images to create an idea, so for us it was like, why don’t we do the same thing? Why don’t we do our commercial and manipulate the images in our favor?”

Although Sana Saeed provides some important thoughts about the ways that young Muslim women relate to mainstream Western culture, her overall presumption that a video like this has no substance ignores the complex ways that visual styles, like fashion and creative videos, can represent the identities of these women. The women behind this video, such as Layla Shaikley, created a video that expressed their identities through aesthetic styles and creativity. Especially in this post-9/11 and now current Trump America, Muslim women are frequently reduced to visual icons that represent an entire religion. Within Western popular culture, Muslim women are often framed as either covered and oppressed by their religion or naked and sexually liberated by Western secular culture. The women in the mipsterz video work to subvert these visual frames by creating counter-images that portray themselves as creative, joyful, innovative, and multi-faceted Muslim American women.